If you haven't experienced the life changing magic of version control, then this post is for you! I've decided to make this one of my very first posts on my new blog because Git and Github are things you'll use in all of your future coding projects. I'll talk a bit about my life before Git (cringe!), the differences between Git and Github, why you should use them, and how to get started. Read on and commence learning my friend! <3

I remember my first attempts at getting started with Git. It was way back in 2012 and I had just gotten my first "real" dev job. No one in my office was using Git at the time, but I had started hearing about it from developers I followed on Twitter. So, I decided to try it out, even though I didn't really know what it was for. I browsed some projects on Github and forked a few becuase.. why not? and after struggling for a whole weekend I finally created my first Github repo. I felt a mild sense of accomplishment, but I wasn't really sure what the point of it all was.

Meanwhile, at the office, my team continued to work on our web projects the only way we knew how. Making updates to a client website went kind of like this:

Sometimes this would get complicated if several people were working on the same project at the same time, but in those cases we were just extra careful about making backups and tried to communicate as much as possible to avoid overwriting each other's work. 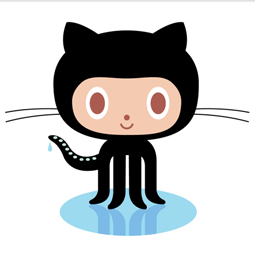 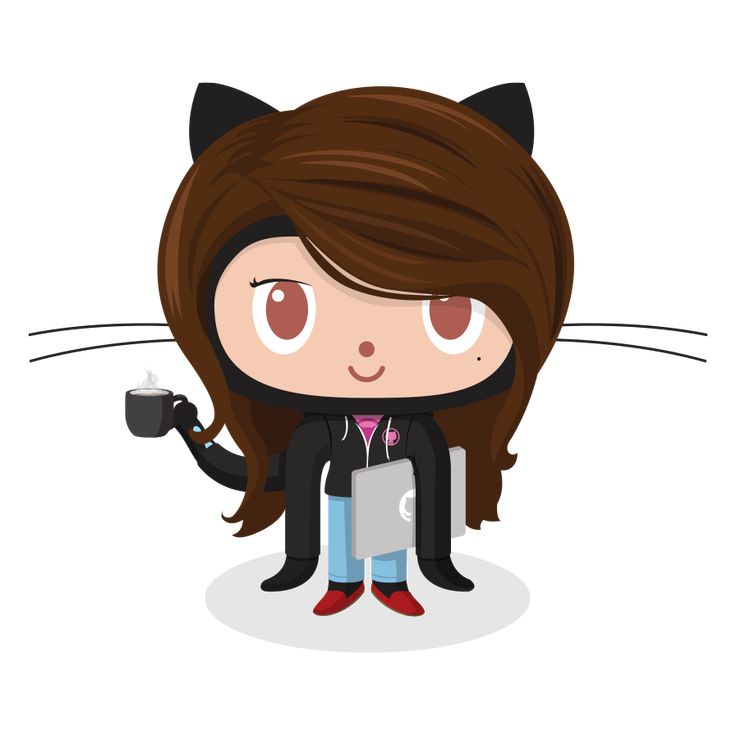 They day my team finally started usng Git, my life as a developer changed forever. It was a hard sell at first. Changing team processes can be difficult and Git is especially intimidating when you don't know how to use it. But once we got used to it, Git made it so that we never had to worry about losing work that we spent so much time on again! And with Github, we could all collaborate much more easily without fear of overwriting each other's work. Finally, I understood WHY Git and Github were so useful and I've been using them ever since. (In fact, I wish we had Git for everything.)

The Difference Between Git and Github

The first thing you need to know about Git and Github, is that they are two different things.

Github is a company that hosts remote Git repositories. It provides a place for you store your code, so if something tragic were to happen to your computer, you don't risk losing important work. It also allows for code sharing and project collaboration with people all over the world.

To put it simply, Git is a version control system, and Github hosts repositories that use Git. Also, repository is the term we use to refer to directories that are using Git to track file changes.

Alright, now that we have some context for what Git is, and why we should use it, let's Git started!

Before you can work with Git, you need to make sure you have it installed on your computer. To see if you already have Git on your computer, open a Terminal (Mac) or Command Prompt (Windows) and run git --version. If you get something that says command not found then either you don't have Git installed or its not

I'm not going to spend time debugging Git installations in this post (sorry!) but if you need additional help getting Git setup on your computer, check out these resources:

If you find any other resources to help get Git working on your system, please share in a comment below! :)

This section contains stuff you should only ever have to do once after first installing Git. We are going to run through some commands you can run to tell Git a little about yourself so that it can relate your file changes to you! We will be applying these setting globally. You can also apply git config setting for individual repos. Pretty cool, huh?

There are lots of other setting in Git that you can configure, but we will stick with these for now. Let's move on!

The first thing we should do when starting any new web development project is set up a Git repo (short for repository) to store and track changes to our code.

cd is the command used to change directories. Next, is the path to the directory. Once inside your project directory, initialize git by running:

If all goes well you should get a response that looks like:

This command ads a .git directory which contains all of the files responsible for tracking your project with Git.

Now that your repo has been created, open your project folder in your favorite code editor.

Before we start adding HTML, CSS, or JavaScript code to our project, we need to add some files that will help us manage our repo. The two files we will add are:

Create a .gitignore file. We will leave it blank for now, but we may add files and folders to later as needed.

Let's just add a title and description for now:

Now that we've done some work, let's make sure we don't risk losing any of it. We will be using the git commit command to save a snapshot of our project at its current state.

The first thing I like to do before I commit any changes is check the status of my git repo to see what changes have been made. To do this simply run:

You should get a response that looks like this:

Ok, good. This means Git is tracking our directory and knows that we create and modified two files, .gitignore and README.md

Now, let's add these changes so we can commit them. To add all of our changes we can run this command:

The . is a way of saying that we want to add all changed files in the current directory. Now let's run git status again to make sure everything was added correctly. If all went well, you should now see something like this:

Now we can commit our changes and add a message to describe the changes we made. To do this, run the following command (add your own message if you like):

Now that we have commited our changes to our local repo, let's set up a remote repository on Github where we can safely store and share our code. If you don't have a Github account, create one.

Once you are logged in, navigate to the 'Repositories' tab on your profile and click the big green 'New' button.

Create a new repository and name it the same thing you named your local project directory. Don't add a .gitignore or README.md since we already did that in our local repo. The rest of your repo settings should resemble the image below: 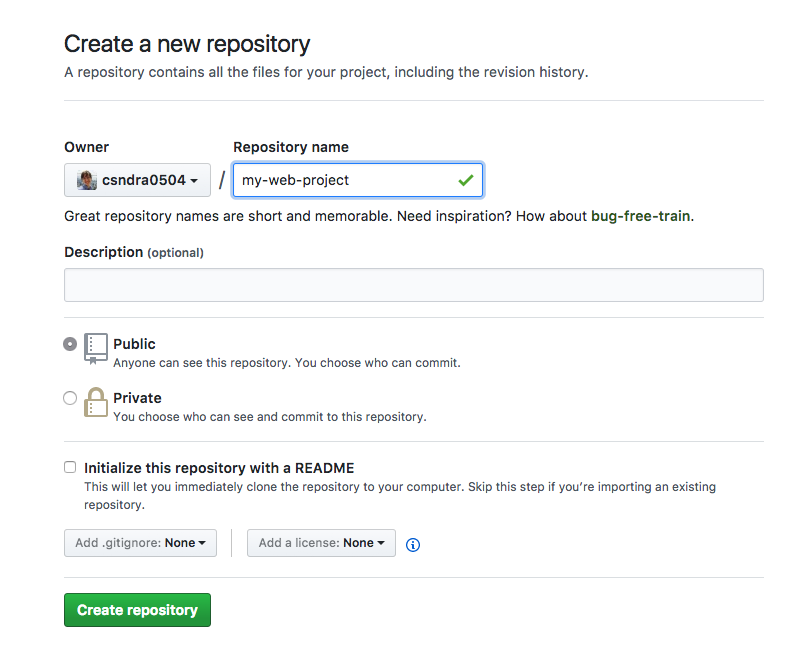 Now that you have created your new Github repo, we need to add it as a remote to our local repo. To do this run the following command (replacing the text in all caps with your info) in your Terminal:

Then set the upstream branch so Git knows where to push our code.

Note: You should only need to run that full command once. Next time you want to push your code to your remote repo's master branch, you can just run git push.

Now go back to your remote repo page on Github and refresh. You should see your .gitignore and README.md files. Awesome job!!!

Now you know the basic flow for adding, committing, and pushing changes from your local Git repo to your remot Git repo on Github. Just repeat these steps for any future changes you make. :)

If you run into any problems while running through this tutorial, leave a comment (coming soon!) and I'll be happy to help out as soon as I can! Happy coding!

Immediately Invoked Function Expressions are function expressions that are immediately invoked. Ok.. but what does that mean and when do we use them?

Technology shapes our culture. The less you have in common with the people who create a culture, the less power you have in that culture.